So I asked her to tell me about her “signature system.”

She spent the next several minutes describing what she called her “signature system.”

Here is a condensed version of how she laid out her “signature system:”

Well, what do YOU think?

Have you been taught about signature systems? If so, does this look anything like what you’ve been shown?

From my perspective, in the end, what she described to me was a tiered collection of programs. A group of different program levels is NOT a “signature system.”

Contrast her description of her “signature system” with this…

A Practical Definition of a Signature System:
Your signature system is the core process, the step-by-step methodology for how you work with a client. It’s also the methodology that’s underneath the initial conversations you have with a potential client. Most people don’t realize this. But it makes those conversations more powerful, yet it’s invisible to those potential clients that you’re speaking with.

Defined and designed this way, your signature system, regardless of the program, would be infused as the underlying foundation of that particular program.

Then, the light bulb went off in Marylynn’s head, and there was no stopping her!!!

Here’s how it went…

“So if I were ever to create the ultimate, or 10 bajillion programs, they would each follow the same approach [at its core].”

If you have a Basic program, you apply your Signature System at the basic level.

If you have an Advanced program, you still have your Signature System but at the advanced level.

The practical definition you gave me, that a signature system is my core process, is not being taught in the mainstream like that.

Not only that, but other supposed experts helped me create what I currently do. And that is supposed to be my “Signature System;” that is, the different levels of my programs. This is very interesting.

Me: Well, that’s okay to define a “Signature System” that way. It’s just not how I define it.

Exactly. Core values and core strength, they have to be there wherever you go.

If you’re a tennis player. If you are a gymnast. You still need the core strength. It goes everywhere.

Me: So, your signature system goes everywhere you go.

I don’t think there’s anything inherently wrong with the tiers and levels of programs you’ve created. It’s just that I’m looking for a more specific definition of how you approach solving problems and delivering value. Like, “what’s your secret sauce?”

I’m looking for your “secret sauce” codified so that we can see it on paper.

I’ll give you an example…

And getting clear about these things gives you the ability to stay focused when there are so many shiny objects that are bright and fun and exciting that can distract you.

Having clarity on values, mission, and vision helps you to stay on track.

What are your STRENGTHS & BLOCKERS?

What is your business STRUCTURE, as in, the business MODEL?

What are your STRATEGIES for growing the business from the inside out, including marketing and sales strategies? But also operational strategies, growth strategies. Whether you want to build a lifestyle business or you want to have a leveraged business that goes beyond a certain income level.

What are the operational business SYSTEMS that need to be there, from financial management to delivering value to clients, to marketing, to selling, to all the logistics?

And what are the SKILLS you need to have?  or you need to develop or bring in, for your business to thrive, and to achieve goals that you’ve set?

What SUPPORT is needed for you in the business – for you and the team – to be able to create an environment where you function at the highest levels of productivity?

What are the prioritized ACTION ITEMS?

What’s your system for ACCOUNTABILITY and FOLLOW-THROUGH?

So, that’s my core process, or “Signature System.” I don’t always say it to people like that. Because it doesn’t really matter. But it only matters to the degree that we’re working on a particular part of their business and, in my mind, I’m thinking to myself and formulating questions, “What are their strengths, blockers, strategies, systems,…”

So, I go through a cascade or mental checklist almost in a heartbeat where I’m kind of using x-ray vision and superimposing my “core client process” to find where opportunities, gaps, and vulnerabilities exist in that business or project.

Does that make sense? 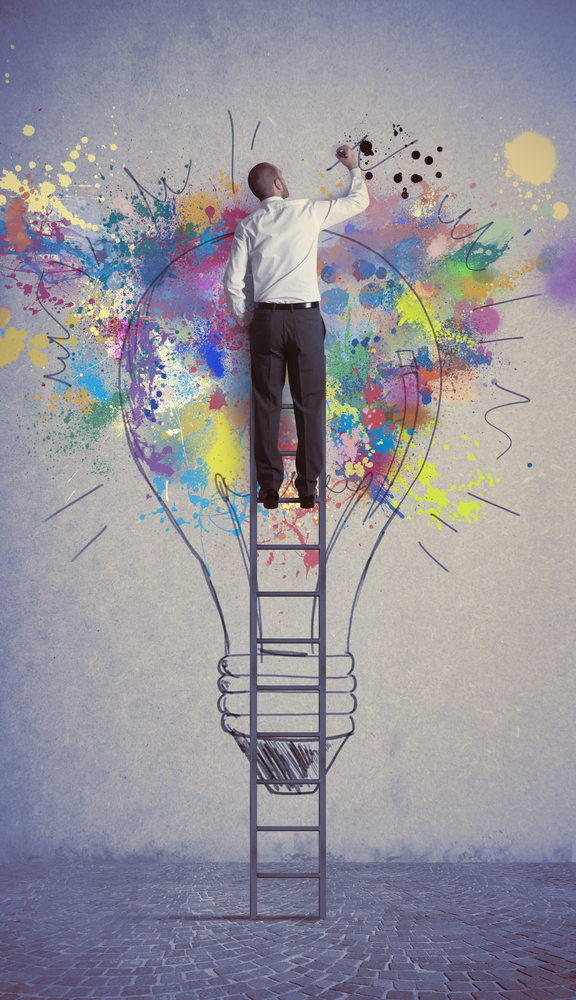 It makes sense. This has been extremely helpful. That was a major “ah hah” moment.

I mean, everything that you say, all the verbiage you use, is exactly what every other program says. With the exception of breaking it down to the point of – everybody else explains the elements of your signature system as “what are the steps of your program?” – but not from this program to that program.

It’s like each “signature system” has a step-by-step program, each one has steps, Each one is a system. Each one follows something. But they’re never the same from program to program. Or, thing to thing. They’re always totally different.

Nobody has ever taught this.

But this makes total sense.

Like all of a sudden, everything in my brain clicks.

Of course, you’d do that. It makes it so much easier to create anything.

And YOU taught me something…

Because I haven’t taken training on signature systems myself, so I didn’t realize that people are saying that your signature system is your sequence of different program levels.

I have literally spent over $60,000 developing my signature system – I really have – with coaches and courses. And every single one of them confirmed and built upon what I had created [from the previous program or coach.] So, with each one, I only kept getting confirmation that I was doing the right thing. Or I was on the right path.

So, I would never think anything was wrong, other than the fact that my signature system wasn’t working. That’s why I kept buying programs and coaching!

I must say, I can think of at least six programs that I have been part of.

And [those other programs,] it’s all surface level. The best way I can describe it; it’s a very surface level approach to the whole thing.

But it’s the way most people approach it, right?!?

But what’s missing is that all these people have more than one program that they teach and, from program to program, it’s a completely different approach. It’s not the same thing, other than the surface stuff.

There’s no skeleton to it. And because it doesn’t have the same skeleton, it’s like a completely different being every time.

But each one has the surface stuff. So from the outside, it’s like the lipstick on the pig.

Everything is dressed up, but there’s no skeleton underneath.

But they are calling it, “this is your signature program” because that’s the one you one you sell the most (or want to sell the most) or it’s the most expensive program you offer.

But there’s nothing “signaturey” about it. No universal approach that you would use with anything. It’s like, mind-boggling to me. But it’s the exact same verbiage that you use, which is why it gets confusing.

That’s why I thought I had a signature system when you first asked me about it.

What you just described to me is more of like they teach you how to reinvent the wheel for each program that you design.

That is literally, exactly what it is.

Your signature system or core client process is really your way of articulating to someone how you see the world.

It’s the world through the eyes of Marylynn; here’s the framework.

Of course, you can add to it.

But it’s like the framing of a home, the structure of a building; it’s there.

And you’re not starting from a blank slate. 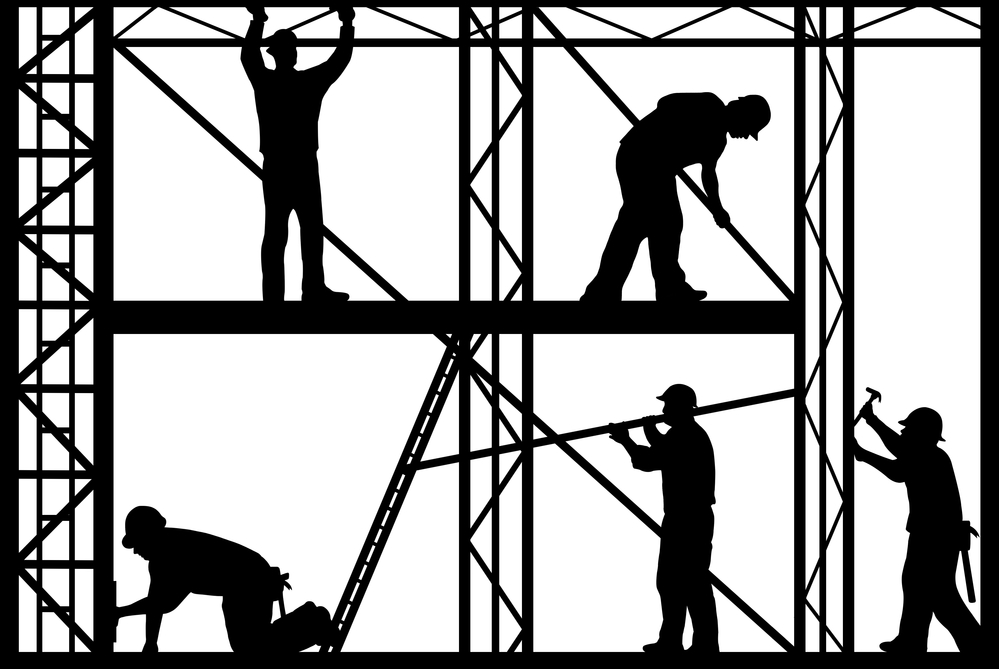 It’s like a tree: A tree has roots, trunk, branches, and leaves. There’s a general structure to it.

And a tree is a tree, but there are different species of trees. Just like you have different types of programs.

But the general framework, which is your core client process, or signature system, is still embedded in whatever other programs you create, even if it’s in a different industry.

What you just described is what people really need to hear: The separation between the old way of thinking about signature systems (that I’m totally done with and that never worked for me) and what a signature system really is.

One day later… Marylynn sends me this in an email: 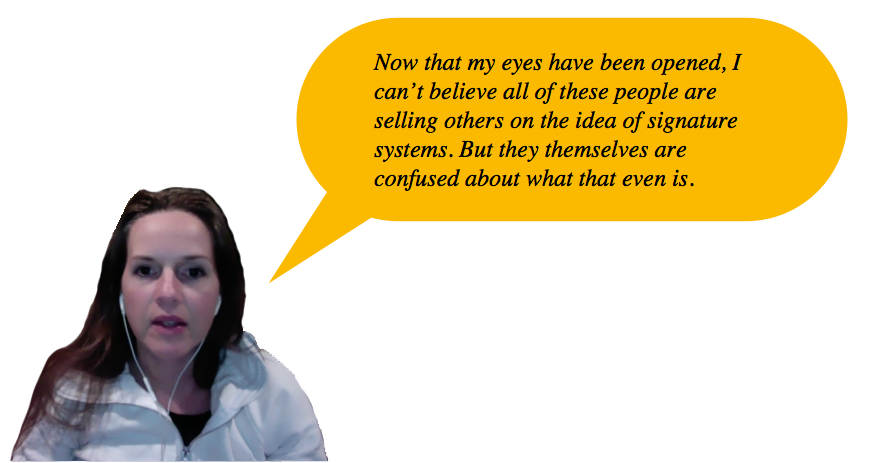 “Now that my eyes have been opened, I can’t believe all of these people are selling others on the idea of signature systems. But they themselves are confused about what that even is; they don’t have a signature system themselves!”

“They simply believe their system is a “signature” one because the exact process for the exact same thing can be repeated. But it’s not really replicable, or they’d easily and always be able to take their signature system and apply it to multiple modalities, niches, sectors, genres, and it’d work. But it doesn’t. If you deviate from their course, they can’t really help you. They don’t really know why their stuff is working.”

So now that you know what a “signature system” really is, you get to choose:

Let me know what you think!

In the next blog post, I’ll share what happened to Marylynn when you applied what she just described during her next interaction with a potential client.

1 Though the term “signature system” is used generically in many circles, I was first introduced to the concept of a “core client process” in 1998 by my very first marketing mentor, Robert Middleton, who also referred to this as a “signature system.”

An Interactive Journey to Freedom from Selling