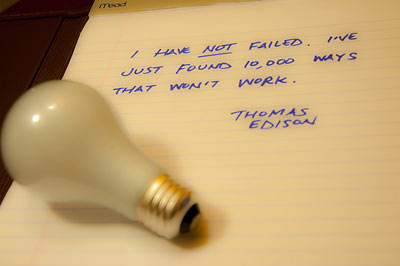 Do You Have The Freedom To Fail?

On July 4, 1776, the Declaration of Independence was adopted, declaring independence of the existing 13 American colonies from the kingdom of Great Britain. And so it is that we in the States look forward to celebrating the Fourth of July, also known as “Independence Day.”

No matter where you are in the world, this is a good time for all of us to explore an important aspect of freedom, one that is uncommonly considered: the freedom to fail.

Everyone has a different definition of what freedom specifically means. Ultimately, freedom is an experience, a state of mind, body, and being.

For me, freedom means being able to be true to myself: Staying true to my own values and being able to express them in the world by learning, pursuing activities, and cultivating relationships that bring me meaningful experiences.

What about you? What specifically does freedom mean and feel like for you?

Whatever it is, I’m pretty sure that your vision of freedom does not include failure. Am I right? After all, who consciously wants to be defined by your failures?

Assuming you are of sound mind, you don’t.

Like it or not, failure is a critical ingredient in the mastery of any skill, of any successful endeavor, including the level of your

business success. Those who have mastered any sport or other skill are the ones who have learned from their failures and made the appropriate corrections.

The big problem is that society, in general, frowns upon mistakes, even though we’re inevitably going to make them. Whether in education or the business world, we penalize people, sometimes severely for making honest mistakes.

What’s more likely to gain prominence in the media: the colossal mistake or the extraordinary act of generosity? It’s no wonder why, at a young age, we start to beat ourselves down, mentally, emotionally, and even physically, for making mistakes.

I’m not proposing that we encourage thoughtless “pillage and plunder” under the guise of the “freedom to make mistakes.” Instead, I’m recommending that we grant ourselves the freedom to fail, in the context of learning and growing from taking chances, while also taking responsibility for the consequences of our thoughts, words, and actions. Lacking such a shift in mindset, we’ll only reinforce the subversive attitude that mistakes are intolerable and perpetuate the “not good enough” mindset for ourselves and future generations to come. There’s no freedom there.

We learn the most from making mistakes. So why is it then, they we also beat ourselves and others so severely about making

mistakes? Many people are afraid to “swing out big” because of their deep-seated fears of failure and shame. If you’re afraid of making mistakes, if you try to “play it safe,” you’ll never have freedom. And you’ll never experience the levels of success that are rightly yours.

Having the freedom to fail means having the courage to take chances, to go beyond what’s familiar and comfortable and to actively learn from what didn’t work and work to improve on it.

Ultimately, freedom is an inner experience of peace, joyfulness, an inner knowing that you are living your life according to your values, while honoring those of others who may be in direct opposition to your beliefs and values. True freedom gives you the power to be at peace with your circumstances and results, desirable or not.

It takes practice and inner awareness to honor your mistakes, failures, and shortcomings for what they are: an important part of your personal growth, an important ingredient of sustainable success.

The freedom to intentionally choose to honor your mistakes as part of your path to success is yours.

What will you choose?