When it comes right down to it, there are three and only three ways to increase revenue in your business:

If you had to choose one lead generation strategy to attract more and better buyers, what would it be? A formal, strategic referral system is one of the most highly-leveraged strategies you could use.

Excellence Is a Process

When things don’t go as well as intended, we often think of ourselves as failures. Or, we blame others or circumstances beyond our direct control.

We tend to have limited intellectual vision; when something doesn’t seem ‘right’ or seem to make logical sense, we tend to get concerned. Sometimes, very concerned.

But what we can’t see is the perfection of the Universe in the longer run. Sometimes, what seems like a ‘raw deal’ or ‘bad experience’ is something which strengthens us and actually serves us in the future.

It’s just that with our limited view of events, we don’t have the ability to see such seeming unpleasantries as desirable and valuable experiences.

Consider that “Perfection is your life as it is this very moment. Excellence, on the other hand, is the process of fulfilling on your commitments in life.”

‘Ancora Imparo’ (Italian for “I am still learning.”)

"Michaelangelo died at eighty-five, leaving an unfinished sculpture and a drawing near where he was found. The drawing was actually a caricature of himself as an old man. Next to the sketch were the words, ‘Still learning’.

– Excerpted from Chanticleer, a publication of the Marin County Waldorf School; reprinted in Waldorf Education: A Family Guide.

How the Sinking of a Great Warship Can Make Your Business Better: The Secret to Aligning Purpose and Passion with Profit

During World War II, the Japanese built a class of the largest, heaviest, and most powerful battleships ever in the history of naval warfare. One of them, the battleship Yamato, was the pride of the Imperial Japanese Navy. Like her sister ship, Musashi, she weighed 72,802 tons and carried nine 460 mm (18.1 inch) guns, the largest naval artillery ever assembled on any warship.

On April 6, 1945, Yamato silently slipped out of port on a suicide mission with no aircraft support and only a light destroyer escort. Her instructions were to attack the U.S. Naval fleet, just off the coast of Okinawa.

The U.S. Navy intercepted Yamato with an aerial attack involving 386 aircraft. Yamato sustained 8 bomb and 12 torpedo hits before listing to port and capsizing. Of the 2,744 sailors aboard, only 269 survived. 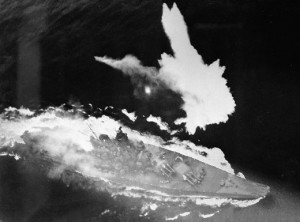 Decades later, one of the survivors described his experience of being in the water, helplessly watching his ship sink and take scores of his shipmates with her. As he bobbed up and down in the rugged waters, he questioned his will to survive. Suddenly, he saw in his mind’s eye, an image of his infant son. At that instant, he realized that he needed to live to raise his son. Living to see and hold his son another day gave the sailor the mental and emotional fortitude to hang on, literally, for dear life.

To this day, he tells his son that he saved his life. That, if it weren’t for him, he wouldn’t be alive. He would have given up, swallowed up by the sea.

This particular Japanese sailor survived because he had a compelling reason to do so, a reason bigger than his own life itself. By focusing on his son, he knew he had to rise above the seemingly hopeless situation and do everything possible to survive. Anything short of that would have meant leaving an infant son fatherless.

What Can We Learn from This?
All too frequently, I see fellow entrepreneurs jump into “doing” mode, overlooking the critical “why?” If you’re stuck in a rut, or simply not making the progress you think you ought to be making in your business, then it’s time to get in touch with the core reason, the unshakable desire you possess within you to accomplish seemingly insurmountable tasks.

Without this, you’re likely to get stopped at the first or second roadblock that comes your way. Then, you’ll wonder why you don’t get what you think you deserve and really want in your life. To be compelling, your “why” shouldn’t be centered on you. And while it doesn’t need to be about saving the world from global warming, it does need to be about something bigger than you alone.

The answer to getting out of the “rut race” is to play a bigger game. You need to think bigger than you every have before. To sustain that, you’ll need to get in touch with your compelling “why.”

Action Plan:
This exercise consists of only two questions; but they may be the most important questions you ever ask of yourself. Pretend that it’s 100 years from now and you are looking back on your life:

Summary:
In the words of my book publisher and mentor, John Robert Eggen:
“…the optimum life for a conscious, committed human being is aligning your purpose, [that] which you were born to do, with how you make your living. In my work with experts and professionals, one thing I realized is that most are conscious, committed people who are striving to realize and integrate their sense of purpose and passion with how they profit.”